Real VBA speed up and performance improvement with VbaCompiler for Excel

After you have applied all of our most important optimization tips for VBA code and now that your code performs faster than it did before optimization, then you may continue to speed up your VBA code further. To improve the performance speed of your VBA code, all you have to do is just by compile it with VbaCompiler for Excel.
After compilation you may multiply performance of your code, by several orders of magnitude in some cases!
Why would the compilation to DLL improve the VBA code execution performance?
Here are the main 3 reasons for that:

1. During compilation, the VbaCompiler converts your code from VBA code to the one of the best run-time performance efficient programming language – the C-language.

2. MinGW GCC C-compiler, which is used as the back-end compiler, performs speed optimizations during binary code generation – the process in which the DLL file is created.

3. We are working to make the run-time library for VBA elements as fast as possible.

Let’s consider different VBA elements and how the compilation to DLL affect their performance.
All of the following examples were compiled with the optimization option level set to “Ofast”.
You may download the “vba speed up.xlsm” workbook, which contains the examples that are used here, from our website.

In the case of For Loop the C-compiler optimizer does the best job to improve performance of the compiled code. 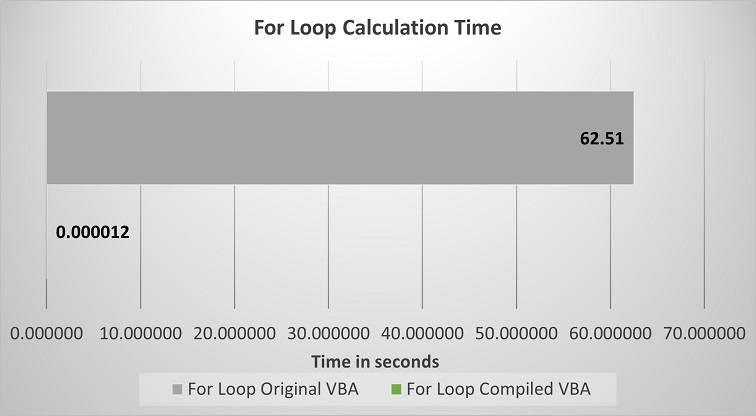 The way in which VBA methods are declared has a significant impact on the performance of the compiled VBA code.
Let’s consider different ways of method declarations.

In this version all of the parameters are declared as a Variant, which are passed by reference. This function returns a Variant value. 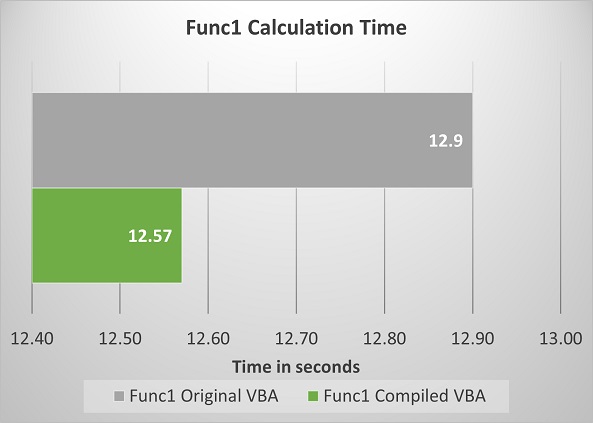 The next version of the same function:

In this version of method declaration, the same parameters are declared with specific numeric types passed by reference and the function returns Double. 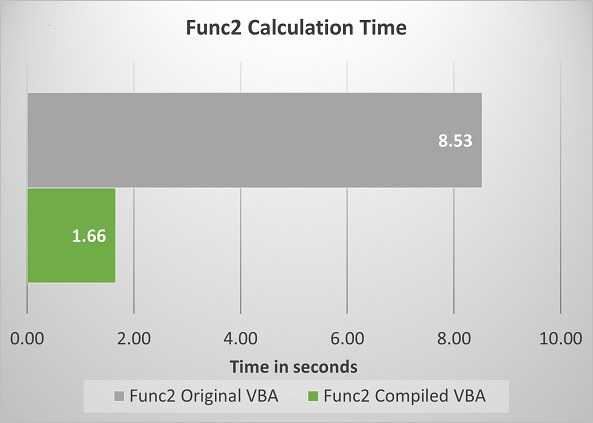 The final form of the same function declaration:

In this version of method declaration, the same parameters are declared with specific numeric types, but, in this case, they are also passed by value. This function, much like the second function covered above, still returns a Double. 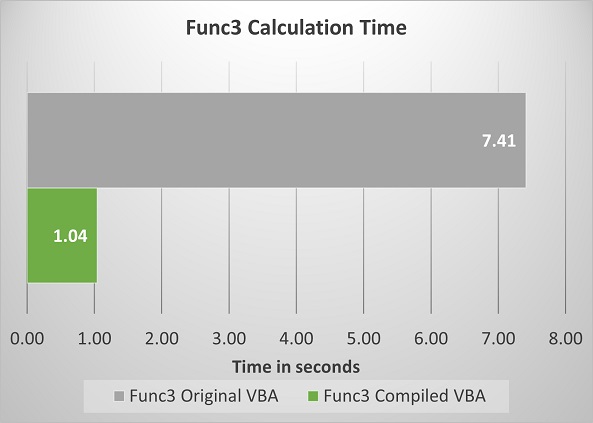 Our approach to speeding up VBA code for object methods after compilation with c-compiler optimization gives a small performance improvement or does not give a performance boost at all. This is related to the c-language optimizer, which cannot optimize complex objects. Also, all of the low-level manipulations of object methods in ActiveX (a technology which is used in VBA objects) are based on the Variant type. The Variant type, from the low-level point of view, is a structure, which is always more complex than a basic type. The performance of structure data manipulations cannot be significantly improved with a c-language compiler optimizer.

Let’s consider the effect of compilation performance boost on the calculation time of VBA methods which populate a big Excel cell range with random numbers (in this case, the “PopulateCells” method) and calculate sum of random data in this range (using the “CalcSum” method). 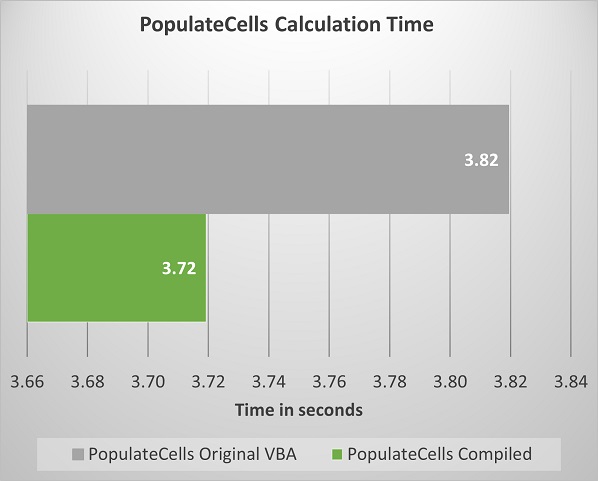 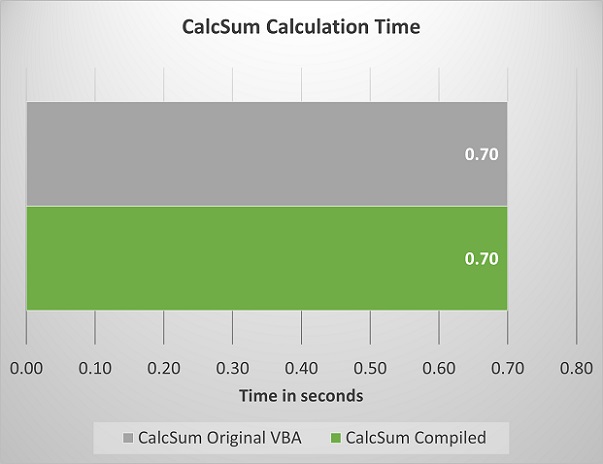 In order to get the maximum out of your VBA code performance after compiling with DoneEx VbaCompiler for Excel, you need to prepare your VBA code before the compilation. This means applying all of the Top 25 VBA performance improvement tips and compiling your VBA code with the VbaCompiler’s “Optimization Level” option set to “O3” or “Ofast”.
As you can see from the tests above, the performance of the compiled VBA code depends on avoiding Variant types and carefully providing the exact data type declaration for your variables, method parameters, and method return types.