VBA Compiler for Excel is VBA protection software which converts the VBA code of Microsoft Excel workbooks and Excel add-ins into the binary code of a native Windows DLL file.

After compilation your VBA code cannot be copied or recovered and has the highest level of protection from piracy.

How the VBA Compiler works

The DoneEx VbaCompiler transforms source VBA code into C-code and, in the final stage, the C-language code is compiled into a native Windows DLL file.

During compilation, the transformation of the source VBA code goes through several stages:

Stage 2. The product generates object code based on results of stage 1.

Stage 3. The product generates C-language code from the object code generated in stage 2.

Stage 4. The VbaCompiler runs a C-compiler to compile the C-language code (which was generated in Stage 3) into a Windows DLL.

Stage 5. The final stage of compilation – the VbaCompiler removes compiled VBA code from the file and generates connective VBA code where all compiled DLL functions are called instead of original VBA code.

Excerpt of the original VBA code before compilation 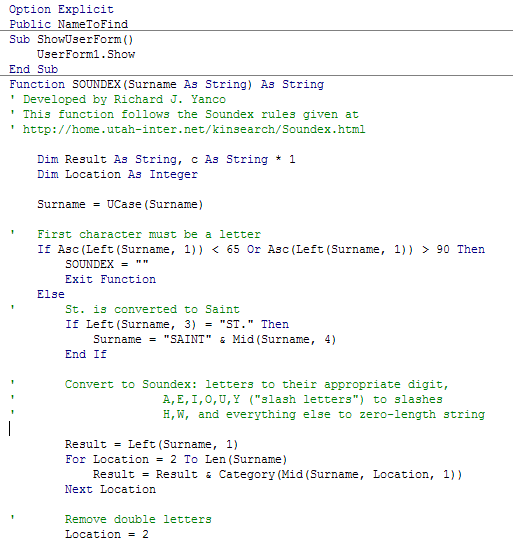 The same VBA code after compilation with VBA Compiler

As you can see that the content of the VBA functions is moved to the compiled DLL file and substituted by the calls of DLL functions.